My only regret is… I don’t have one, yet I am still full of regret.

Everything I’ve done in my life, whether good or bad, has been a lesson to learn from. All the pain and anguish that I may have suffered has been a positive, making me the man I am today. I feel horrible for those I may have wronged but I now truly believe that God has forgiven me, even if others (and myself) have yet to forgive me.

So why am I still filled with regret? Well it’s because of a choice that was taken away from me; a choice I never had. I regret I could never enlist in the Navy.

As a kid growing up, lots of guys wanted to be in the Air Force, flying jets. Some, wanted to be Marines or soldiers, kicking down doors. Me? I wanted to sail the seas.

Top Gun may have peaked most kids interest but to me, the submarines in The Hunt for Red October absolutely fascinated me then and now. These machines are the size of buildings, dipping and diving around the deep. Powered by nuclear power plants. Are you kidding me? No gas for these beauties. Oh, and enough nuclear weapons to take out a continent. What isn’t cool about nuclear submarines. Heck, they’re even painted in a sick flat black.

But, because of obvious health reasons, I could never serve.

God has other plans for me and who am I to question Him. I was not given that path for a reason.

There are other reasons too. I am very grateful to this country and would have loved a chance to defend her. Serving one’s country is the best way to tell her “thank-you.” I’m a smart guy with tons of talent. I know the anti-war crowd thinks that putting our best and brightest in harm’s way is a waste. The fact that I could never use my talents for my country makes me feel like I’ve wasted my talents.

Whenever I see a veteran I am grateful just like everyone else. But I also carry a little jealousy and, of course, regret.

I know that there are other ways to serve our community. I can be a good citizen to my neighbors. Live a crime free life. Help those less fortunate than me. In all, I hope that being a good American citizen is enough to thank her. I wish I could’ve served a bigger role.

At the end of last year’s Camp HONOR (our hemophilia summer camp) we have a tradition to end camp called the pinecone ceremony. Every camper and staff member goes up in front of everyone and says a few things of what the week meant to them. I of course dedicate my pinecone to the most important thing in the world – the Arizona Cardinals – but one of our board members, Jim Durr, dedicated his to his son. Jim also has a bleeding disorder called von Willebrand disease. His son was on his way to become a sailor. After the pinecone ceremony, I spoke to Jim and told him about my heavy heart about not being able to join the Navy. He shared with me that he too wished to serve but how proud he is that his son will be able to live out his dream. Who knows, maybe on day I’ll be able to share in Jim’s pride and live vicariously through my sailor son.

So if you ever see me with glossed over eyes looking at the ocean, it’s not the seagulls that are moving me but the warships in the horizon. 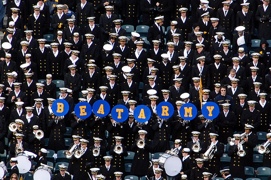